Myra Biddulph was the daughter of Francis Edward Biddulph, Brevet-Major, 9th Regiment, and his wife Annabella. She is a mystery as, while there is no mention of a Myra in the family, she appears as Myra in the official civil records.  She is believed to have been called Alice by the family. There are no civil records of a birth or a death of Alice. Possibly she was called after her sister Isabella Alice who died in Pembroke Dock in 1875.

Myra, or Alice, was born on the 29th of August 1877, in Rosemount, New Kilmainham, Dublin.

Biddulph - August 29th, at Rosemount, New Kilmainham, the wife of Captain F.E. Biddulph, 9th Regiment, of a daughter, who survived her birth only two days. 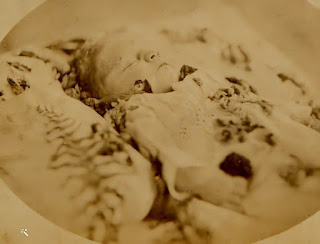 She was buried on the 4th of September 1877 in Grangegorman Military Cemetery.

What grief there must have been at the death of another child after the sad deaths in Wales.

Posted by Nicola Jennings at 10:25