Anne was the eldest daughter of fourteen children of Francis Biddulph [1774-1827] and Mary Marsh of Vicarstown, Queen’s County. Francis Biddulph was the Registrar of the Court of Exchequer.

She married Symon Biddulph on the 8th of September 1821 in the church at Killaghey, now known as Killoughy. Symon was the son of Sir Theophilus Biddulph, Bt., and a member of the 25th Regiment. He died young in 1823.
Death: Died Friday se'nnight, at the house of his aunts, the Misses Biddulph, where he was visit for his health, Captain Simon Biddulph, of the 25th regiment, the 30th year of his age.[1]
Anne married again, four years later, in 1827. Her second husband was James Moilse, a solicitor, of 23 North Frederick Street, Dublin.
Their daughter, Susan Elizabeth Moilse was born at 23 North Frederick Street, Dublin, on the 14th January 1830, but not baptised until 1832. There is a note in the church register where her father James is recorded as deceased.[2]
Known as Elizabeth, she married Thomas Wilkinson, M.D., of Clonaslee, Queen’s County, on the 16th July 1863.[3]
1863 21 July: Dr Wilkinson & Elizabeth Moilse.  At St. Peter’s Church Dublin Dr Wilkinson, of Clonaslee to Elizabeth daughter of the late James Moilse, Esq., solicitor, North Frederick Street, Dublin. [4]
They had five children.
Anne and James Moilse may have had another daughter, Charlotte Frances Moilse.  She died in Kingstown, County Dublin, in 1887, naming Elizabeth Wilkinson as the executor of her will.
After the death of James Moilse, Anne married a third time, Robert Frederick Graham, in the parish of St. Mary’s, Dublin, on the 8th of December 1835.[5]
Anne’s sister, Elizabeth, is buried in Deansgrange Cemetery, County Dublin. On her gravestone Elizabeth is remembered as the eldest daughter of Francis Biddulph.
Sacred to the Memory of Elizabeth Biddulph eldest daughter of Francis Harrison Biddulph, Esq., of Rathrobbin, King's Co., late Registrar of the Court of Equity Exchequer in Ireland.
But it was Anne who was the eldest daughter. Like many of her younger siblings who emigrated to England, America and Australia, she was forgotten. 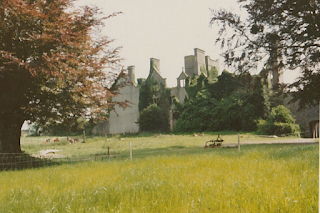 Posted by Nicola Jennings at 08:58 No comments:

Nicholas Biddulph of Congor, County Tipperary, was born in 1803, the eldest of
the three sons of Francis Biddulph and Mary Steele. He had two sisters, Anne, who married Hugh Boyd Wray, and Elizabeth, who never married. His brothers Richard and Francis Biddulph both emigrated to Canada and settled there.
He succeeded to Fortal, King’s County, after a prolonged legal dispute which ended in 1824.
He was admitted to Trinity College, Dublin in 1825 at the age of 20, and matriculated in 1827.[1] He was then admitted to Peterhouse College, Cambridge from Trinity College, Dublin.
In 1833 he married Catherine Lucas of Woodlodge, County Cavan, daughter of the Rev. Edward Lucas [1766-1815], also known as Edward Clements, and Elizabeth Clements,  of Rathkenny, County Cavan.
At Muff Church, County Derry, on the 31st August, by the Rev. James L.M. Scott, Nicholas Biddulph, Esq., of Kingsborough, King's County, to Catherine, daughter of the late Rev. Edward Lucas, County Cavan.[2]
They had one son Francis Edward Biddulph.
Catherine died in 1834.
Deaths. On Thursday last, in Portarlington, after giving birth to a son and heir on the preceding Sunday, Catherine, wife of Nicholas Biddulph, Esq., the melancholy and premature death of this lady is sincerely regretted by a large and respectable circle of acquaintances  to who a mild and ..... (cutting incomplete).
Nicholas married a second time, in St. Peter’s Church, Dublin, in 1839. His second wife was Isabella Digges La Touche, the daughter of James Digges La Touche [1788-1827] of Sans Souci, County Dublin.
At St. Peter's Church, Dublin, Nicholas Biddulph, Esq., of Conger House, County Tipperary, to Isabella, eldest daughter of the late James Digges Latouche, Esq., of Sans Souci, county of Dublin.
Nicholas and Isabella had nine children, James, Robert, William, Richard, Isabella, Mary, Anne, Grace and Ellen.  They were unsettled times and the following incident took place at Congor in 1841. Their first child, Isabella, was a year old.
About 7 o'clock on Wednesday evening three armed men came to the gate house of Congor, the residence of Nicholas Biddulph, Esq., two of whom entered and the other remained outside. On their entrance they demanded firearms from Thompson, Mr. Biddulph's steward, threatening to shoot him if he did not comply. While reaching the house the light went out and Mrs. Thompson escaped through a back door and ran to Congor House for assistance. Mr. Biddulph and his servant immediately proceeded to the gate-house, but the fellows were gone. One fellow pursued (Mrs. Thompson when escaping, but was unsuccessful and called out No. 3 stating that Thompson should suffer for letting his wife escape with the arms; which, however, was not the case as there were not any in the house at the time.[3]


Nicholas Biddulph died on the 5th April 1888. Isabella survived him by a few months. She died on the 19th September 1888.
They are buried in Congor graveyard close to where Ardcroney Church once stood. The Church has since been removed to Bunratty Folk Park. The gravestone bears the following inscription.
Biddulph
Erected by their children in memory of Nicholas Biddulph, J.P., of Congor House, died 5th April 1888, aged 84 years.
Isabella his wife died 19th September 1888 aged 78 years.
Also Arthur Stuart Biddulph who died 1st January 1914 aged 10 years.
In memory of Mary Biddulph who died 1st January 1914. Also her sister Annie who died 21st September 1901. Birr View, Birr.
'I am the resurrection and the Life.'