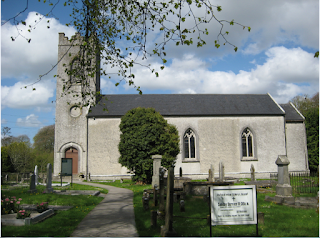 [Private collection]
Posted by Nicola Jennings at 08:28 No comments:

Harriet was the eighth and youngest child of Francis Biddulph [1727-1806] and Eliza Harrison. Her name can also be found as Biddolph.

She married the Reverend Richard Clarke [1777- 1838] on the 26th of January 1799.
They had 9 children.
1. Elizabeth [1800-1881] was the eldest child. She died in Portarlington, a spinster aged 81, described as a Lady on the death record.
2. Richard [1807-1866] appears to be  the eldest surviving son. He attended TCD in 1824 aged 17 and completed his studies in 1832.  He married Mary Caroline Minchin in 1836.  Rector of Geashill, King's County, he was buried in Geashill Graveyard, St. Mary Church of Ireland.His death was registered in Tullamore. His brother, Jonathon Clarke, of Upper Pembroke Street, Dublin, and his widow, Mary Clarke, of Eglington [sic] Park, Kingstown, County Dublin, were named as two of the executors of his will.
3. Francis [1808-1877] attended TCD in 1824 aged 16 and completed his studies there.[1] He married Rebecca Clarke, daughter of Jonathon Clarke and Elizabeth Thomas, in 1838. They had one son Francis Edward Clarke who became a doctor. Francis was married a second time to Jane Crozier Magee. They had three daughters, Anna Selina, Margaret Jane and Harriet Biddulph. His wife, Jane, their three daughters, and his son Francis Edward, are all mentioned in Francis Clarke’s will.
4. Harriet Biddulph [1811-1904]  can be  found in the 1901 census where she is recorded as  Harriett Clarke, 90, born Kings County, unmarried, Church of Ireland, occupation "income house property" living in Kilmalogue, Port Arlington North. She died in Kilmalogue, Portarlington in 1904; a spinster aged 93, and is described as a Lady on the death record.
5. Jonathon [1816-1887]  also attended TCD in 1831 aged 15, became a solicitor and married. He died on the 28th of July 1887, aged 70, at 30 Clarinda Park East, Kingstown, County Dublin. Minnie E. Clarke, his daughter, was present at his death. His widow, Emily, 16 Crosthwaite Park East, Kingstown, County Dublin died in 1901.
6. Edward John [1825-]  attended TCD in 1842 but there is no record of Edward having  completed his studies.[2]
7. Mary, of whom nothing is known
8. Frances, of whom nothing is known
9. Patience [-1860]
The Reverend Richard Clarke died in 1838 and is buried in St. Michael’s, Portarlington, where he had been a minister for 37 years. He left a will, which no longer exists.
The Rev. Richard Clarke, thirty-seven years Chaplain of St. Michael’s, Portarlington, and twenty years Sovereign of that borough.[3]


The following extract gives some idea of the troubled times of his ministry:
Letter from A Lindsay Kyffin, Chief Constable, Mountmellick, [Queens County or County Laois], to Maj Powell, Inspector General, Corkagh, Rathcoole, [County Wicklow], reporting on intimidation and beatings of workers, who agreed to work on a canal at a lower rate of 10d per day. Mentioning the beatings given to two men named Conroy near Portarlington, an attack on the house of Edward Cavanagh, threats issued to Murphy, tenant of Maj Chitwood. Noting that an investigation conducted by Rev Richard Clarke and his fellow magistrates concluded that a larger constabulary force is required. [CSO/RP/OR/1828/283][4]
Harriet died in Portarlington in 1850, and is believed to lie in Lea Cemetery, Lea Parish, Queen’s County, together with many of her children.
Lea Parish Graveyard contains a Church of Ireland church (built c. 1810), marked on 1841 OS map as 'Church'. Graveyard contains headstones dating from 19th to 21st century; generally in good condition; mostly upright. The northwest corner of the graveyard is very overgrown and contains some badly damaged gravemarkers dated to the 19th century; this area also contains a large portion of table tombs.[5]

Patience Biddulph was born in 1817, the tenth daughter and thirteenth child of Francis Harrison Biddulph [1774-1827], Registrar of the Court of Exchequer, Dublin, and his wife, Mary Marsh.
Her death is not recorded in the General Register Office. Nothing more is known of Patience who may have died before registration of death became compulsory in 1864, or  may have emigrated like three of her sisters.
Posted by Nicola Jennings at 04:52 No comments:


Charlotte Biddulph was born on the 9th of December,  1815, the ninth daughter and twelfth child of Francis Harrison Biddulph [1774-1827], Registrar of the Court of Exchequer, Dublin, and his wife, Mary Marsh.
Her death is not recorded in the General Register Office. Nothing more is known of Charlotte who may have died before registration of death became compulsory in 1864, or  may have emigrated like three of her sisters.
Posted by Nicola Jennings at 04:51 No comments:

According to Burkes Landed Gentry of Ireland, 1912, Sarah Nesbitt Biddulph was born on the 11th of  December 1814, the eighth daughter and eleventh child of Francis Harrison Biddulph [1774-1827] of Vicarstown, Queen’s County, Registrar of the Court of Exchequer, Dublin, and his wife Mary Marsh. It was recorded in Burkes that she went to Australia, information presumably supplied by a family member.
This birth date may, however, be incorrect.  Records in Australia suggest that Sarah’s birth date was later, possibly as late as 1824, or even 1830, though inaccuracies and variations in other records make it impossible to be sure.
What is certain is that Sarah emigrated to Australia in 1854 on the STAR OF THE EAST, a Clipper Ship sailing from Liverpool to Melbourne, as an unassisted passenger.  Her name on the passenger list was spelt Beddalph, her age was given as 24, and her estimated birth date was 1830. It seems likely from checking other names on the passenger list that she travelled with a group of friends, among them James Waller, Ralph Gore and Rachel Purefoy.
Until the early 1860s most emigrants left Liverpool on a sailing ship, and the voyage to
Australia would take about 3-4 months…Emigrating in a sailing ship could be unpleasant, particularly during a storm; it was only better in degree in the early days of steamships! [1]
However an article in the Illustrated Sydney News of 22 October 1853 describes the STAR OF THE EAST. ‘As a specimen of modern naval architecture, she is one of the finest vessels that has ever arrived in this port.’
On the other hand, a passenger travelling the same route in the same year, 1853, wrote:
I shall never want you to step your foot on board an emigrant ship, unless in the 1st cabin, for all the places of iniquity my eyes ever beheld, an emigrant ship is the worst, men and women packed indiscriminately together, married couples and young girls, and I am sure  some of the girls will have cause  to remember the STAR OF THE EAST. Then the drinking and gambling, night and day, till your heart would fairly sicken at the sight.[2]
Sarah married William Day, a miner, from New York, on the 10th of February, 1856, in Yackandandah, Victoria.  Gold had been discovered in Yackandandah four years earlier, in 1852, resulting in a gold rush which attracted many prospectors eager to make their fortunes.  For a time Yackandandah became a busy place. Although the gold rush ended a long time ago, it is still possible to obtain a prospector’s license and to pan for gold in Yackandandah.
They had two children, William b. 1857 and Sarah b. 1858. Their daughter, Sarah Day, married Francis Davidson in Sydney in 1880. A son, Francis Biddulph Davidson, was born in 1881.
Sarah Nesbitt Biddulph died in Raglan, New South Wales, in 1888.
[1] https://www.liverpoolmuseums.org.uk/maritime/archive/sheet/12
[2] http://www.old-merseytimes.co.uk/staroftheeast.html

Posted by Nicola Jennings at 10:14 No comments: