Andrew Allen Kennedy was born in Ballyrainey House, Newtownards, in 1788, the son of Hugh Kennedy of Ballyrainey and Susannah Kennedy of Ballymaglaff, Comber. He married Annabella Campbell on the 15th September 1808 in Portpatrick, Wigtownshire, Scotland. The witness was Robert Kennedy Esq., of Comber, County Down. Annabella lived at 40 Dame Street, Dublin where her father, John Campbell was a stock broker

Andrew Allen Kennedy, of the British and Irish Fire and Westminster Life Offices, Having been duly appointed a Stock Broker, respectfully requests from the Friends of his late Father-in-law, Mr. John Campbell, a continuance of their favours. 40 Dame-street, 2d August, 1820. [Freeman's Journal, Aug 02, 1820 and Aug 09, 1820]

They had five children, two of whom, Hugh and Martha, died in infancy. They are buried in St. Werburgh’s, in Dublin. His daughters, Catherine and Susan, both married. His son, John Campbell Kennedy, became a solicitor.
Andrew Allen Kennedy, of Mount Pleasant, died young in 1821, aged only 29. He is also buried in St. Werburgh’s.
Posted by Nicola Jennings at 10:40 No comments:


Elizabeth Jennings was born in 1839, the third and youngest daughter of Andrew Jennings and Mary Anne Clarke of North Street, Newry, County Down. Her sister Mary Catherine died in Phibsborough, Dublin, in 1864 and is buried in St. Mary’s Catholic graveyard, Newry.

After her father’s death Elizabeth and her mother Mary Anne moved to 35 Goldsmith Street in Dublin. Her brother Charles Clarke Jennings died in 1870 in north Dublin.  Her mother also died in June 1876 and is buried in Glasnevin Cemetery, Dublin.

In ‘Irish Art Loan Exhibitions 1765 - 1927’ (Index of Artists Vol. I.   A.- L.) by Anne M. Stewart - Loan Treasures of Art Museums Dublin - ‘Storm at the Lizard, Cornwall’ (15 pounds 15 shillings. 0. pence.) is listed as lent by E. Jennings in 1873.
In 1877, when she was 38, Elizabeth won a prize at the Queen's Institute, Dublin for drawing foliage from nature. The Queen’s Institute of Female Professional Schools was on Grafton Street, and included the Dublin Female School of Art. It had been founded by a Quaker, Mrs Anne Jellicoe, who went on to found Alexandra College. The Institute was run by Miss A. B. Corlett.

Elizabeth appears in the 1911 Census for England and Wales in Horndean, Hampshire.  She was 71. When she died, and where she is buried, are not known.
Posted by Nicola Jennings at 14:02 No comments: 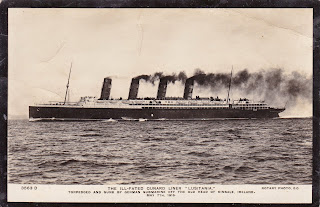 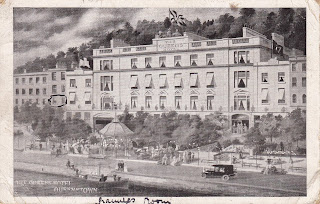 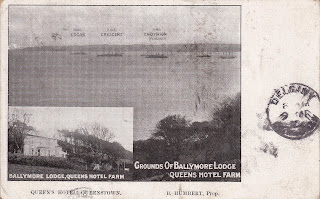 Posted by Nicola Jennings at 02:45 No comments:

What follows is a fictional account of the sinking of the Lusitania on the 7th of May 1915. It is based on the written account of Amy Biddulph who helped to nurse some of the survivors. Her name has been changed to Vicky. Her mother, Annabella Biddulph and Violet Biddulph, her sister-in-law, also assisted. The watch was given to Violet Biddulph.

The following morning was fraught, but somehow Vicky managed to find a space and a lull in which to walk down to the sea wall and gaze out at the calm and sunlit sea. Below her five white lifeboats rocked at their moorings. Each bore the name Lusitania in black lettering. They were filled with life preservers, many of them bloodstained, bearing witness to the fact that this had been no ordinary shipwreck. As she watched trawlers came into the shore, bearing the bodies of the dead. Ahead of each one came a crowd of screaming gulls. The crews of the trawlers described how the wreckage of the ship spread across the sea for miles, boxes, basketwork, deckchairs and floating amongst them the bodies.
Vicky felt the shadow of war reach out and encompass her, here in the sunshine, so far away from the battlefields of Europe. The Cork Examiner carried the story on pages 7 and 8. Rose and Vicky had barely time to glance at it before they returned to their posts. But Vicky folded it up and kept it in her suitcase.

On a warm summers day six weeks later a package arrived at Marie Lodge. Hearing the dogs barking, Vicky came in from the garden where she had been deadheading the roses and took it from the postman at the front door herself. She could see Du Croix had sent it. The sinking of the Lusitania seemed already far in the past, a nightmare best forgotten. She brought it into Rose in the kitchen turning it over and over in her hands.
“Open it?” suggested Rose, drying her hands on a tea towel.
Vicky tugged at the wrappings, tore open the paper, opened the carton inside and lifted out a small velvet covered jewel box. Opening that she saw a gold watch, feminine, dainty. A green ribbon. She turned it over in the palm of her hand. There was an inscription on the back.
Ellen took it from her and strapped it to her wrist. She waltzed around the room holding out her arm and admiring it. “I wish Daddy could see it,” she said. But James was in Dublin, having at last been granted a Commission in the Territorials in May. Vicky had been forced to accept his absence.
Arthur had come into the room behind them, curious to see what had caused the sudden uproar. He took the watch from his granddaughter and examined it in the light from the kitchen window.
“For great kindness” he read,” from a survivor of the Lusitania.”
“But who?” she asked. “There’s no note. Only a card from Du Croix.”
“Who knows," he said handing it back to her. “ Someone who appreciated your care. Keep it safe. Keep it for your daughter.”
[Extract from an unpublished novel Who is Vicky Hamilton?]
Posted by Nicola Jennings at 02:20 No comments: