In July 2015 the National Library of Ireland placed the Catholic Church Registers of Ireland on line. These are the original microfilms, and baptisms and marriages are recorded in a variety of handwritings, some in copperplate as clear as the day they were written, others impossible to read, many in Latin, faded, torn, with ink spilled on them, frustrating and exciting at the same time. They shed a clear, if sometimes fragmented, light on times past, on large families and infant mortality, on abandoned children and illegitimacy, on mixed marriages, and, in the 19th century, on the steadily increasing population and the catastrophe that was the Great Famine.
In Waterford City, in the 18th Century, they show a slice of the life that existed for the Catholic population in a busy port at that time.
Unusually, the earliest registers record the profession of the groom or father of the child to be baptised, nauta - sailor, naucleri - ship's master or owner, fabri lignari - wood worker or, in this case can be assumed to be, ship builder,  indicating the importance in which these professions were held at that time., and also mercato - merchant. There is no mention of shopowners, farmers, doctors, teachers or lawyers.
William and Thomas Power were ship builders as noted in the registers for St John's in 1717 and 1718.
Also noted in the registers are the countries of origin of those men, assuredly sailors, who married into Waterford.   Madeira, the Azores, Newfoundland.
Behind all this trade and business there was finance. Bartholomew Rivers of Tramore was a banker, a partner in the banking firm Hayden and Rivers, and married to Mary Blake daughter of Philip Blake, penmaker,  of Dublin. Their children, Thomas 1755, Maria 1758, Bartholomew 1759, Maria 1760, Anna 1763, Mary Ann 1764, Elizabeth 1766, and Joseph 1772, were all baptised in the Cathedral.
Posted by Nicola Jennings at 10:35 No comments: 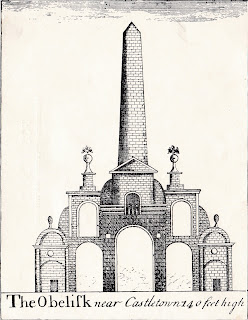 Obelisk at Castletown House, County Kildare.
Posted by Nicola Jennings at 03:40 No comments: