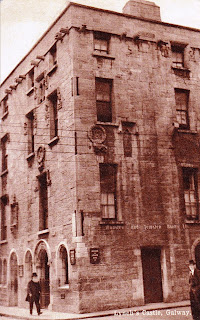 Posted by Nicola Jennings at 09:45 No comments:


Daniel Jennings was the son of Andrew Jennings and Catherine O’Toole of 11 Upper North Street, Newry, County Down.
He was ordained at Maynooth by the Most Reverend Dr. Troy, Archbishop of Dublin, on the 27th. May 1809, and was appointed Parish Priest of Magheralin, Moira, County Down in the Diocese of Dromore, on the death of the previous incumbent Fr. Lavery.
Here he rebuilt the Church of St. Colman, Kilwarlin on land granted to the Catholic people of the area by the Marquis of Downshire. On the 7th December 1812 the Marquis of Downshire laid the foundation stone of the new church. It was then dedicated by the Most Reverend Dr. Derry, Bishop of Dromore on the 24th October 1814. The new church was said to be a neat, stone, roughcast, whitewashed building with a thatched roof. There was a painting of a crucifix over the altar, and the floor was partly boarded and partly mud. It had taken almost two years to complete, and cost one thousand pounds, a sum raised by subscription. Daniel Jennings had gone to England to raise the money.
It was rumoured that Lady Granard of Granard had presented the church with an ancient bell, the Clog Ruadh, but the bell never materialised.
The Rev. John Quail, P.P., Magheralin, wrote, ‘It was a Father Jennings who built Kilwarlin chapel; the date on it is 1812. But neither in it nor in Magheralin is there any trace of a bell….I do not know of any person who had the Clog Ruadh in his possession… I think there is no evidence that Father Jennings ever possessed the bell.’
From late 1816 to 1819 there was a devastating typhus epidemic in Ireland. A bacterial disease carried by lice, it was spread throughout the country by the large number of homeless families and vagrants travelling the roads seeking food, work and shelter.William Carleton compared Ireland at this time ‘to one vast lazar-house, filled with famine, disease and death. The very skies of heaven were hung with the black drapery of the grave’,
In August 1817 Daniel Jennings died of typhus in the home of his father, Andrew Jennings, 11 Upper North Street, in Newry.
‘Another victim to the prevalent distemper. Mr. Jennings was an honour to his sacred pro- fession’ commented the Belfast Newsletter  ‘there was no bitterness in his heart, and there flowed none from his pen.’
The Newry Commercial Telegraph printed a long eulogy.
‘1817, 6 August. The  Rev. Daniel Jennings, Roman Catholic pastor of Moira ... died in the course of Wednesday night last at the house of his father, Andrew Jennings, Esq.merchant of Newry ... He was conversant in ancient and modern polemics, and took a distinguished part in some recent discussions. He sought also to assuage the angry feelings of party. Appointed to the care of a poor congregation, to the disgrace of the country, without an edifice for the protection of public worship ...he erected a chapel.’

Posted by Nicola Jennings at 03:52 No comments: