Catherine Lucas was born, probably in 1798, at Woodlodge, County Cavan. She was the daughter of Edward Lucas, also known as Edward Clements, a descendant of the Lucas family of Castle Shane, County Monaghan, and his wife Elizabeth Clements, and was named after her maternal grandmother, Catherine Cope.
In 1833 she married Nicholas Biddulph of Congor, Co. Tipperary and of Fortal, King's County, now County Offaly.
Catherine died on the 6th of June 1834.  An incomplete and unidentified newspaper cutting describes the melancholy event:

Deaths. On Thursday last, in Portarlington, after giving birth to a son and heir on the preceding Sunday, Catherine, wife of Nicholas Biddulph, Esq., the melancholy and premature death of this lady is sincerely regretted by a large and respectable circle of acquaintances...

Four days earlier, on 2nd June 1834, she had given birth to her first and only son, Francis Edward Biddulph.
Posted by Nicola Jennings at 09:04 No comments: 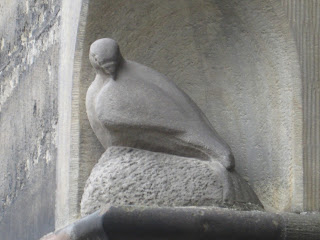 Posted by Nicola Jennings at 08:33 No comments: