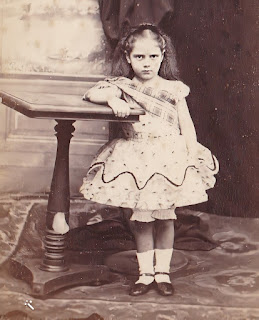 Catherine Mary Biddulph, known in the family as Kate, was the eldest child of Francis Edward Biddulph and his wife Annabella. She was born in Haddington Road, Dublin on the 25th of November 1861.

The family sailed for the Mediterranean on H.M.S.Trafalgar in 1863. Kate’s brother Nicholas Trafalgar was born at sea on the 6th of December.

Two more children were born in Tonghoo, British Burmah. Francis was born on the 9th December 1865 and survived four days. He died of convulsions. Hugh Wray Biddulph was born on the 12th of November 1866.

Kate died of typhoid fever at 6 Ulsoor Rd., Bangalore, India, on the 24th of July 1869, aged seven years and eight months. Her burial is recorded in Bangalore Trinity Church.

By October 1870 the family had returned to Ireland.

Posted by Nicola Jennings at 02:25