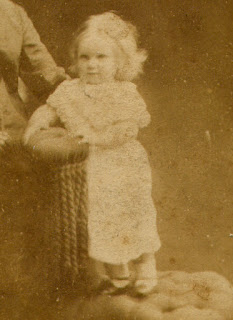 Ethel Emily Biddulph was the second daughter of Francis Edward Biddulph and his wife Annabella. Her older sister, Catherine, had died in India in 1869 so Ethel was now the only girl.

She was born in Aghada, County Cork on the 6th of Feb 1872, and baptised on the 14th of February 1872. Her baptismal sponsors were Richard E. Biddulph, Harriet Anderson, and Margaret Kennedy.

Richard Edmund Biddulph was her half uncle, half brother of her father Francis. He was 20 years old at the time, and studying in Trinity College in Dublin. He later joined the Royal Navy as a Surgeon.

Margaret Kennedy was her maternal grandmother, and the widow of John Campbell Kennedy.

Who was Harriet Anderson?

Ethel Emily Biddulph died on the 5th of March 1875, in Pembroke Dock, Wales. She was three years old.

She is buried in Llanion Cemetery, Pembroke Dock, with her siblings.

Posted by Nicola Jennings at 03:08