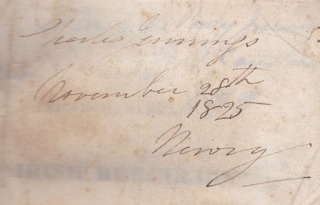 He was also involved in helping those in need in more practical ways. 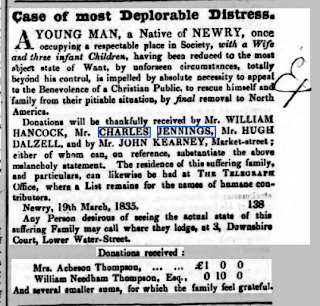 Charles Jennings was very actively involved with the Catholic Church.
We, the Undersigned, request a MEETING of the CATHOLIC INHABITANTS of the PARISH of NEWRY, at the NEWRY CATHOLIC POOR SCHOOL, on SUNDAY the 13th day of January, 1828,  at the hour of TWO o'clock, for the purpose of petitioning the Legislature for the ENTIRE and UNCONDITIONAL restoration of our unjustly withheld rights; and of adopting such other proper measures, with reference to this subject, as may appear necessary to said meeting.Newry, 8th January, 1828.
Denis Maguire, Constantine Maguire, John Caraher, Patrick m'Parlan, Mark Devlin, Charles Jennings,P,C.Byrne.[1]
John Caraher, mentioned above, was one of the executors in Daniel Jennings' will.  He married one of Andrew Jennings' daughters.
Catholic Association. New Catholic Rent :
Charles Jennings  1 pound.
Francis Jennings 1 pound.
Andrew Jennings 1 pound.[2]

In 1839 there appeared in the Newry Telegraph[3] a biased article describing the arrival of Daniel O’Connell in Newry. He received a warm and enthusiastic reception, or as the Newry Telegraph put it ‘O ye gods and little fishes! What an exhibition of themselves they did make! What a reception they did give their burly idol!’
The full and detailed description of the procession through Newry to the Quays is well worth reading if only to capture the atmosphere of the occasion. Charles Jennings provided the premises on Merchant’s Quay where the dinner was held. The Newry Telegraph describes the dinner [or lack of] in great detail.
The following day Daniel O’ Connell left Newry at 7 o’clock. The Newry Telegraph still had nothing good to say about his visit. ‘Mr Andrew Jennings, mounted on his grey poney, rode in solitary dignity beside the carriage, which soon reached the Dublin road and passed onwards. We have time only to wish Mr. Daniel O’Connell much joy of his agitating tour to the North - his first and his last. It has been and ever will be the “black North” to him and his designs.’