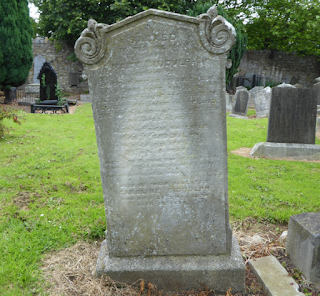 On the 10th March 1801, a third daughter of Francis Harrison Biddulph of Vicarstown, and Mary Marsh was born. She was christened Mary after her mother.  She was not to survive, and died, aged only six months, on the 10th of September 1801.
Her younger sister, the fourth daughter and the fifth child of Francis and Mary, her brother Francis Marsh Wellesley Biddulph having been born in the previous year, was born on the 16th of September 1803. She was also christened Mary.
Mary Biddulph died on the 2nd of April 1863 and is buried in Carrickbrennan Cemetery, Monkstown, County Dublin, with her mother, and her sister Caroline.
Posted by Nicola Jennings at 09:07