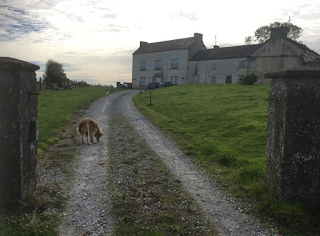 Mary Biddulph was born in 1842, the second daughter of Nicholas Biddulph and his second wife Isabella Digges La Touche, and is likely to have been a twin of her brother James Digges La Touche Biddulph.

In the 1901 Census she is living in Bunrevan with her sister Annie Biddulph after the death of her brother James. She was 52. Annie was two years younger. By the 1911 Census she is living in Birr View, Crinkill, alone, Annie having died in September 1901. It appears that she was leasing from Patrick Corboy. There was no land involved, only a residence.
Mary Biddulph died in 1st January 1914. She was 72 years old. She, like James, is buried in Congor graveyard at Ardcroney.
In memory of Mary Biddulph who died 1st January 1914.
She left £4, 671 15s  9d.  She had appointed her brothers Robert and Richard as her executors. In her will she made a bequest of £100 to the church at Ardcroney.[1] Her sister Annie is commemorated below a window in this church, but there does not appear to be any commemoration of Mary. The Ardcroney church is now situated in Bunratty Folk Park.