Annie Adela Waller Biddulph, the eldest daughter of Francis Marsh Biddulph of Rathrobin, King’s County, and Lucy Bickerstaffe, was born on the 25th March 1847.
She married John Willcocks, of Chapelizod, Dublin, on the 24th April 1867. He was a retired Captain of the 3rd Middlesex Militia.
Their first daughter, Lucy Annie Willcocks was born in King’s County on the 22nd of February 1868. She married Lionel Lockington Harty in Chapelizod in 1894. The wedding presents are described in a press cutting as being ‘numerous and very handsome.’ Mr. H.L. Harty gave them a piano and a brass lamp. Mrs Bickerstaff a white ostrich feather fan with a mother o’ pearl handle. There was a silver coffee pot, sugar basin and soup ladle, a Worcester china dessert service,  a set of silver dessert spoons from John Willcocks,  a carriage rug, Austrian china vases from Annie’s sisters Wilmot and Florence,  a Queen Anne silver teapot,  an inlaid marble clock, etchings of Irish scenery,  handsome table linen, and much more besides. The Rev. A. Dancer Purefoy, who officiated, presented the couple with a family Bible and prayer book. Mrs Purefoy gave them a Japanese tea table. From the servants came an antique silver mustard pot, flower vases, handsome silver punch ladles and a plush workbox, and a glass centrepiece mounted on mirror.
In 1901 Lionel and Lucie Harty lived at Balrobin, Barronstown, County Louth with their two daughters, Eileen R, aged 5, and Kathleen A, aged 3. By 1911 they have a son, Lockington, aged 8.
Marian Emma Willcocks was born on the 1st of August 1869 in King’s County. She married Frederick Francis Ledwich, barrister at law, in 1891 in Chapelizod. In 1911 the couple are living in Ballitore, County Kildare, with their only daughter Violet Annie Biddulph, aged 18. Frederick was not practising as barrister, but ‘derived his income chiefly from dividends and annuity from land’.
Wilmot Willcocks was born on the 12th of November 1870 in Charleville Street, Tullamore. She married Stafford Mouritz Cox, Physician and Surgeon, in 1897, in Chapelizod. By 1901 Stafford Cox is a widower, living in Roden Place, Dundalk, County Louth. Wilmot died in 1899 aged only 29.
The only son of Annie and John Willcocks was born in Dublin on the 14th April 1872, and christened John. John Willcox, son of John Willcox and Annie died on the 7th of March 1919 in Dublin. He was 46 years old.
Florence Caroline Willcocks was born in 1877. She married Benjamin Ivan Tilly in 1897. In 1901 they are living on St. Laurence’s Road, Clontarf, Dublin. Benjamin Ivan Tilly is the Registrar of the Metropolitan School of Art of the Science and Art Institutions, Dublin.  In 1911 they live at Belmont Terrace, North Circular Road, Glasnevin, Dublin.. Three children have been born to them, with only one surviving, who is not named in the Census return. Florence died in 1925.
Annie’s husband John Willcocks died in Dublin in 1882.

Annie was married again in St Barnabas’ Church, North Dublin in 1898, to John Ouseley Bonsall Murphy of Riversdale, Palmerstown, County Dublin. John Ouseley Murphy was born in Queen’s County, a widower, and an accountant. In the 1901 Census they were living in St. Laurence, Palmerstown, Dublin, with her son John Willcocks, an annuitant, possibly money left to him by his father, and her stepson, John Cullinan Murphy, son of John Ouseley Murphy, aged 26, a student of Medicine.
Annie Adela Waller Biddulph died in 1926 and is believed to be buried in Chapelizod, Dublin, in the Willcocks plot.
Posted by Nicola Jennings at 04:19 No comments: 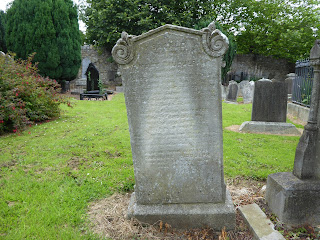 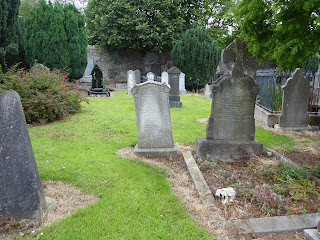 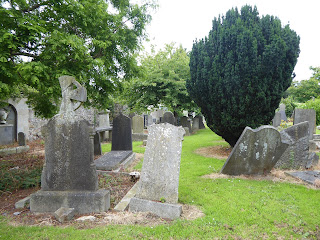 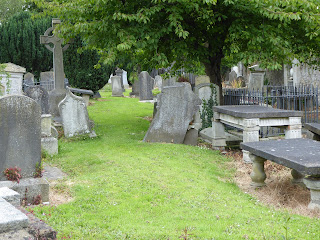 
Nicholas Marsh Biddulph was born on the 20th of December 1805, the second son and seventh child of Francis Biddulph and Mary Marsh of Vicarstown, Queen's County. He was one of fourteen children, thirteen of whom survived. He married Elizabeth Maria Steele on the 25th September 1824 in Gretna Green, Scotland. Both were recorded as being from Donnybrook, Dublin. Their first daughter, Margaret Anne, was born in Elm Villa, Irishtown, Dublin, on the 8th of October 1826. A second daughter, Elizabeth, was also born in Dublin in 1831. Anna [1833-1912] was born in Galway. Adelaide too was born in Ireland in 1840.

Nicholas became a Lieutenant in the Irish Revenue Police. Known as the ‘Potheen Hussars,’ the Irish Revenue Police were mostly employed in the detection of illicit liquor stills. Their uniform was distinctive. As an officer Nicholas would have worn a blue frock coat and grey trousers, and probably cut a dashing figure. In 1835 he was in Crossmolina, but at some time in the late 1830s he seems to have left Ireland, as his eldest son, William, was born in 1838 in Marthen, Wales. A second son, christened Wellington James, was born in England in 1841. His youngest daughter, Rosalie, was born in 1845, in Somerset.
In the 1841 Census the family are found living in Gore Hedge, Frome, Somerset. Nicholas has independent means.
In the 1851 Census Nicholas is no longer with his family, and does not appear in the Census, but Elizabeth still describes herself as a wife, and not a widow. Elizabeth died in St. George, Southwark, in 1852. Two of their daughters, Margaret Anne, and Anna, married and emigrated to America.
Adelaide Biddulph, on her marriage to John Brooks on the 20th of May 1861 in St. Mary’s, Lambeth, describes her father Nicholas Biddulph in the marriage register as deceased.
Some accounts state that Nicholas Biddulph lived until 1900. If the source of this information is Burke’s Landed Gentry of Great Britain and Ireland, there is some room for doubt as Burke’s can be inaccurate. However, there is a death recorded in Dublin of a Nicholas Biddulph in 1899 of advanced years. Had Nicholas returned to Ireland leaving his family in England?

Posted by Nicola Jennings at 10:55 No comments: