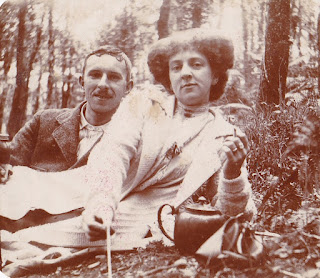 Beatrice Anne Biddulph was born on the 14th of August 1880 in St. Kilda’s, Parsonstown, now Birr, County Offaly.[1] She was the 14th child and youngest surviving daughter of Francis Edward Biddulph and Annabella Kennedy, and had two sisters close to her in age, Amy, born in 1875 and May Biddulph, born in 1879. Beatrice was known as Bea, and also, in the family, as Biddy.

The family later moved to Marie Lodge in Dalkey, County Dublin, Beatrice and her sister May, appeared to have enjoyed a varied social life.

They had enjoyed cycling in Parsonstown and continued to do so in Dublin, not always abiding by the law.

Petty Sessions 1905. Miss Beatrice Biddulph, Dalkey, Co. Dublin. Constable Talbot. On the 26th of April 1905 at Johnstown, Co. Dublin, the defendant did unlawfully and wilfully prevent or interrupt the free passage of persons on the road by driving a carriage to wit  a bicycle on the footpath…Contrary to 14 and 15 Vic C92 S13.

Convicted and ordered to pay for fine the sum of two shillings and sixpence and for costs the sum of one shilling and sixpence or in default of payment forthwith to be imprisoned in [Kilmainham] Mountjoy Gaol for the period of seven days without hard labour unless said sums are sooner paid.[3]

No doubt the fine was paid.

The following year Bea began her training in Harcourt Street Children’s Hospital, Dublin. Her sister Amy had also trained as a nurse in the Royal Hospital, Baggot Street.

In 1912 she was presented in Dublin Castle.

Presentations. The following ladies and gentlemen had the honour of being presented to their Excellencies at St. Patrick’s Ball last night….Miss Beatrice Biddulph (by Mrs Comyn Kenny).[5]

Mrs Jennings and Miss Joan Jennings are also included in this list.

Bea married Archibald Mateer in 1914. He was known as Archie, and also as Chicko. His father, Archibald Mateer having died in 1892, when Archie was still a child, his mother, Olivia Smythe, married as her second husband, John Howard Parnell, brother of Charles Stewart Parnell. They were married in the Mariners’ Church, Dun Laoghaire, the Kingstown, on the 13th of June, 1907. John Howard Parnell was a bachelor and a City Marshall of Dublin.

Archie was to join the army, the Queen’s Liverpool Regiment.

Family history suggested that Bea and Archie were already married in Liverpool and that the second marriage in Dublin was to please his mother. A record of the Liverpool marriage shows that this story is actually true! Archie was residing at 14 Elliot Street, Liverpool. Bea gave her address as Marie Lodge, Dalkey.

To please his mother Olivia, as he was very fond of her, a second marriage took place in Dublin.[8]

A marriage is arranged, and will take place the last week in December, very quietly, in consequence of the war, between Captain Archibald John Percival Mateer, A. D. C. of the King's Liverpool Regiment, only son of the late Archibald Mateer, Esq., J.P., Carlingford House, Carlingford, Co. Louth and Mrs John Howard Parnell, of 1 Clarinda Park, E., Kingstown, and grandson of the late Colonel J. Smyth, 2nd Batt. the Welsh

A detailed description of the wedding seems to have appeared in a contemporary newspaper.

"Killarney" writes from Dublin: - It was quite refreshing to have a smartly-dressed wedding in our midst this week. Since the war began brides and bridegrooms have married very quietly in travelling garb, and in many cases the bridegroom has been called off at a moment's notice. In this instance the bridegroom was Captain Matier (sic) A.D.C to General Edwardes on the Mersey Defence Scheme, and his bride Miss Biddulph, daughter of Colonel Biddulph, late of the 19th Regiment. She had bridesmaids - two nieces, Miss Nellie FitzGerald and Miss Ellen Pease - and also a page, Master Francis Pease, who was dressed as a miniature soldier. It was a pretty wedding, and there was a reception afterwards, the happy pair having a great send-off. Captain Matier is son of Mrs. J. H. Parnell, of Clarinda Park, Kingstown.

Bea and Archie had no children.

Archie later became Assistant Commissioner of the Nigeria Police in 1919.

After Archie’s retirement as Commissioner of the Nigeria Police, the couple came home to live in a house called Maplegrove, in Ballybrack, County Dublin. There they kept hens, and a rooster, and Archie built caravans. Bea kept Maltese Terriers. Archie organised the annual flower show in Dun Laoghaire Town Hall. Harold de Mowbray Parnell, a meteorologist and the son of Henry Tudor Parnell, lived with them until his death in 1961.

Beatrice, known in the family as Bea or Biddy, died suddenly in 1967 at home in Maplegrove.  She was 87. Her body was laid out in the drawing room overnight.

She is buried in Deansgrange Cemetery, County Dublin.[10]

In Cherished Memory of | BEATRICE (BIDDY) | daughter of Col. And Mrs. BIDDULPH | of St.Kilda, Birr and Marie Lodge, Dalkey | died 27th June 1967 | adored wife and comrade of |ARCHIE MATEER for 54 years | All her life she trusted in God | and His Son Jesus Christ |

From 1967 on, Archie lived at the Abbey Hotel, Haigh Terrace, Dun Laoghaire, County Dublin, Ireland where he was wonderfully looked after by Mrs Moreland, only moving into a nursing home towards the very end of his life.

Archie became a Catholic shortly before his death. His funeral took place from St. Joseph's Catholic Church in Glasthule, which he said he and Bea had often visited together.

He is buried in Deansgrange Cemetery with Bea.

Posted by Nicola Jennings at 03:19 No comments: